The Applegate Trail is the southern route of the Oregon Trail.  It was blazed in 1846 by Applegate brothers – primarily Lindsay and Jesse, with Charles remaining at home in the Willamette Valley of Oregon, to keep watch over the extended families, land and livestock.  All three brothers had been born in Kentucky, but they and their extended families moved west and settled in Missouri.  In 1843, when the economy took a hit and their financial situation suffered, they migrated to Oregon on the original Oregon Trail.  During that journey, as the families were navigating the rapids on the Columbia River just outside The Dalles, one of their rafts capsized.  Lindsay’s son Warren, age 9, Jesse’s son Edward, age 9, and Alexander McClellan, age 70, were drowned.  This tragedy made the brothers determined to try to find a safer route from the East to the Oregon Territory, for the pioneers who continued to migrate to the Oregon area.  Thus, the Applegate Trail was blazed in 1846 as a more direct, and hopefully safer, route to Oregon.  Lindsay and Jesse Applegate, along with Levi Scott and ten others, formed a scouting party to be known as the South Road Expedition. On June 20, 1846, they began their journey south, and it was a harrowing journey for all.

The following links tell the amazing story of developing The Applegate Trail:

The Oregon History Project – The Applegate Trail.
This website has several other links related to the Applegate brothers.
https://oregonhistoryproject.org/narratives/nature-and-history-in-the-klamath-basin/inhabiting-the-land/the-applegate-trail/#.WUXCEpDyvBV

Trails West – A Photo Tour of the Applegate Trail
https://emigranttrailswest.org/virtual-tour/applegate-trail/ 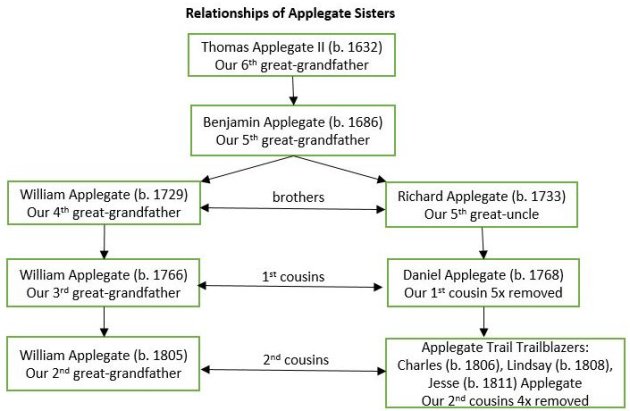 Some excellent books about The Applegate Trail:

Send us an email